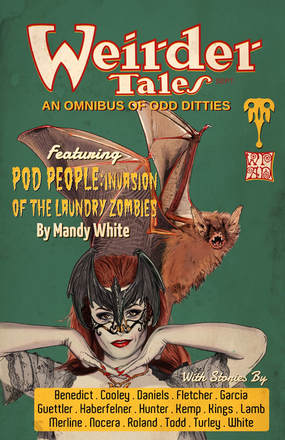 Ernest sat up in bed. “ You hear that?”
Louise looked up from her book. “What’s that, dear?”
“There it is again! It’s the basement door. It’s those damn zombies.”
“Oh, I’m sure it’s nothing. Just the wind.”
“Wind my ass!” Ernest muttered, glancing at the shotgun leaning against the wall in the corner of the bedroom. These days he kept both barrels loaded, just in case. “It’s zombies, I tell ya! I thought I told you to get rid of those fucking laundry pods.”
The door rattled again. Ernest had installed sturdy new locks, but they would never give up as long as what they desired lay on the other side of the door.
“Dammit, Louise! This is your fault!”
Louise peered at him over the rims of her glasses. “Seriously, Ern? And what do you expect me to do with them? Just throw them away? I paid good money for those, and I can’t buy them anymore. I’m not going to throw away perfectly good products! Besides, they get the laundry so clean and bright!”
“Clean and bright isn’t worth risking our lives.”
Louise gave him one of those looks reserved for naive children and simpletons. “Isn’t it? Stain-free clothes are worth a little risk. Don’t be a coward, Ernest.”
Ernest opened his mouth to argue, then closed it. He knew when he was licked.
“Ok, fine, use them up then. How many are left?”
“I bought the Mega Pack from Costco. I got in on the sale just before they pulled them from the shelves. It was one of the last ones, and I was lucky to get it. People are so rude. Fighting, clawing, just to save a few dollars.”
“Isn’t that the same thing you were doing?” Ernest pointed out.
Louise shrugged. “Well, I got them, so I’ll be damned if I’m just going to throw them away.” She sighed. “I’m sure going to miss those things. They get the laundry so clean and bright.”
* * *
What had started as a stupid YouTube stunt turned into a disaster of epidemic proportions. The idiots who ate Tide laundry pods experienced unfortunate side effects from the chemicals contained in the detergent. Brain function slowed. These individuals, clearly short on brains to begin with, became shambling, babbling shells of their former selves. (one still might argue that it was an improvement) The other, more disturbing effect was the hunger. The Pod People craved the colorful packets of toxin and would go to any lengths to obtain them. They possessed an uncanny ability to sniff them out. Stores stopped selling the detergent after the first few weeks of the epidemic to stop the looting. Citizens were ordered to turn their Tide Pods over to authorities. Anyone found with the pods in their possession would not be eligible for police protection in the event of zombie attack. Attacks were the biggest concern, because bites were the way the plague was spread. And Pod People were bitey little fuckers. They were faster than they looked, in spite of their shuffling gait, and inordinately tenacious when focused on something they wanted – that something being Tide Pods, of course. A bite from one of the Pod People would transfer the toxins that flowed through their veins. Victims of bites began to crave laundry pods, overcome with an irresistible urge to eat them. If not apprehended and incarcerated, they wouldn’t rest until they found and ate some of the detergent. Over time, brain damage set in, transforming them from desperate junkies into shuffling, mumbling zombies. Pod junkies were more dangerous than full-fledged zombies because they still retained some of their (albeit limited) intelligence and still looked like regular people, aside from their desperate, pod-craving behavior. They were also contagious; a bite or scratch from a pod junkie was all it took to spread the addiction.
* * *
And now someone was trying to open the basement door, attracted by the scent of those godfucked laundry pods Louise was so bloody insistent on keeping. Ernest hoped it was just a zombie and not a junkie. Pod junkies were crafty enough to find a way past a locked door. Zombies just bumped against the door like a trapped Roomba until something else caught their attention. Either way, Ernest knew he was in for another sleepless night. He checked his guns to reassure himself they were loaded, and prayed the locks would hold.
* * *
The next night Ernest awoke sitting in his recliner, where he’d dozed off while watching TV. He heard a sound in the laundry room downstairs. He raced to the bedroom to grab his shotgun. The locks hadn’t held after all. One of the bastards had gotten in and from the sound of it, was in the laundry room chowing down on Tide Pods.
A fucking pod junkie.
Ernest cussed silently and crept toward the sound, shotgun at the ready. The hunched figure in the laundry room had its back to Ernest. He raised the gun and clicked the safety off. The junkie stopped munching and turned to face him, streaks of blue and orange running down its chin.
“Clean and bright!” Louise giggled. “Yummy! And they make everything clean and bright!”
Louise wiped an arm across her mouth and Ernest saw the deep red scratches on the underside of her arm. The scuffle at Costco had yielded more than just a bargain on detergent.
“Join me, Ern. It’s Heaven! Heaven, I tell you!”
“Stay back, Louise. Don’t make me – ”
Louise lunged at Ernest and he squeezed the trigger.