Battle of the Bean
​​*Featured in WPaD's post-apocalyptic anthology, 'Goin' Extinct: Tales From the Edge of Oblivion'. 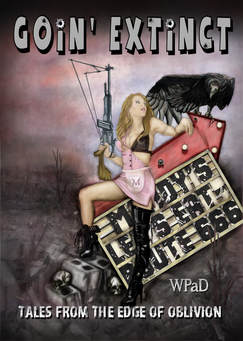 It was the end of the world as we knew it, and nobody felt fine. Remember that song by R.E.M.? It’s been stuck inside my head since this whole thing began.

Anarchy reigned; society was in chaos. People rioted in the streets. Yadda-yadda apocalypse…

All because of one little thing. A tiny thing really. Not quite miniscule, perhaps the size of a pea, but a tiny thing nonetheless.

We were warned of the impending extinction of our precious bean, but like so many warnings before it, we chose to ignore it until forced to confront the ugly truth.

It began early in the century, when farmers in Colombia noticed a troublesome blight affecting the Arabica plants. The blight, known as ‘coffee rust’, was a type of fungus that spread rapidly, despite all efforts to eradicate it.

Some blamed pollution, others blamed global warming, but regardless of who or what was to blame, Arabica crops in Latin America were wiped out by 2017, and from there it spread to crops in Africa.

Still, the public pooh-poohed. As long as Starbucks kept pouring eight-dollar lattes, there was no cause for alarm. The problem was far away from their sheltered yuppie environment. Cultivation was the farmers' problem, not theirs. Even when the Arabica crops were gone and the price of that particular variety skyrocketed, people simply switched blends.

It wasn't until every coffee plant on the planet was dead that we were willing to acknowledge that we had a problem. The problem escalated to catastrophic levels when the governments took control of the world's remaining supply of coffee. Coffee disappeared from supermarket shelves. Starbucks went out of business. Coffee shops with boarded-up windows littered the urban landscape.

At more than ten times the price per kilo, coffee replaced cocaine as Columbia's most lucrative illegal export. Coffee cartels waged war on each other in hopes of controlling the world’s dwindling supplies of the precious brown bean. Penalties for smuggling coffee ranged from several years to life in prison or even death by firing squad, depending on which country one was arrested in, but that didn't stop an intrepid few from trying their luck.

Street value of an ounce of ground coffee climbed higher than that of gold. Users traded automatic weapons, priceless family heirlooms and even the deeds to their homes for a cup of espresso, just to get one more fix of that aromatic black nectar.

We tried consuming tea, colas and caffeine pills, but it didn't take us long to learn that caffeine wasn't what gave coffee its addictive nature. It turned out there was another ingredient we had overlooked. A mystery ingredient that latched onto the brain much like cocaine did. Suffice it to say, lack of this ingredient made some people very unhappy indeed. Scientists analyzed it, tried to isolate it and tried to synthesize it but to no avail.

The increase in violent crimes due to coffee withdrawal led to the legalization of marijuana. Pounds of Purple Kush, Amsterdam Indica and BC Big Bud now occupied the shelf space that had once displayed pounds of French Roast, Breakfast Blend and Decaf. A society of anxious, stressed-out bean-hounds became laid-back and complacent, sleepily smiling as they crammed their mouths full of snacks.

Of course, there were still the hardcore addicts, for whom nothing else but the bitter ambrosia would do. White-collar professionals became organized crime bosses, dealing the world's most valuable substance to street addicts, some of them former colleagues. When the coffee finally ran out, one country accused the next of hoarding it, even though nobody had any coffee anymore.

With everyone at each other’s throats, the UN dissolved. Their final meeting ended in a massive brawl; a Battle Royal between nearly 200 delegates that resolved nothing. The situation deteriorated to the point of war, with everyone pointing warheads at everyone else.

With a bunch of coffee-starved world leaders holding their jittery fingers over the red button, I did what any sensible man would and went to ground.

I found the bomb shelter in my neighbor’s back yard after investigating the sound of a gunshot. I found him at his kitchen table, where he had been trying to snort lines of instant coffee before giving up and swallowing the barrel of his .357. Poor bastard – everyone knows there’s no real coffee in that instant stuff, but looks like he died trying.

I found a shovel and thought I’d do the neighborly thing and give him a decent burial but damn, the ground was hard! I tried a few different spots but kept hitting rocks, then at one point I hit something metal. Curious, I dug it up, and damned if I didn’t find a bomb shelter! Probably built during World War II and long forgotten under layers of landscaping. My neighbor probably bought the house without even knowing it existed.

So, when the threat of nuclear war became imminent, I packed some supplies and retreated into the shelter with plans to stay put for a few weeks or months until the coast was clear. I brought food, plenty of water, books to read, flashlights and batteries, but I needn’t have bothered to pack so much because when I got down there I discovered the shelves well-stocked. Sure, eighty-year-old canned goods might not be ideal, but they were better than nothing if it came down to it. I scanned my flashlight over the shelves and lo and behold! What did I see? Coffee! Cans and cans of magnificent, marvelous coffee!

I had packed a butane camp stove and a few cases of fuel, so I was all set to prepare hot meals. Now hot coffee would accompany those meals! This dark, dusty hole in the ground had suddenly become paradise.

I’m writing this down, partly to keep myself busy so I don’t think about coffee. I also thought it would be a good idea to record what became of our world just in case nobody else is alive to do it.

As close as I can figure, it’s been about six months since I felt the first of the bombs hit. My food supply is dwindling, even the really old stuff. If I have to eat another can of cold lima beans I’m going to scream. Who the hell puts lima beans in a bomb shelter? I guess I could leave the shelter, but as long as I have coffee in my possession I run the risk of getting robbed, maybe even killed for it. Lord only knows what’s happening up on the surface.

I’m down to my last can of coffee, but I’ve been putting off opening it because once it’s gone, then I truly will be out of coffee. After that I will leave the shelter and see what awaits me up above.

I’ll wait one more day to open it. I can go without coffee for just one more day. I’ve been saving one last can of butane to make it nice and hot. Cold food I can handle, but cold water won’t brew coffee.

I made it a whole week. Wow. That’s one more week before I run out. As long as I have that can of coffee, I’m the richest man on earth. I might also be the only man on earth, but… mere details.

Two weeks, and that damn can of coffee sits there unopened, mocking me, daring me to open it. You’d like that, wouldn’t you? Nice try, coffee can. I’m smarter than you. After all, you’re just a stupid can of coffee. I’m over you. I don’t love you anymore. I could quit you cold turkey if I wanted to.

Aw, fuck it. Since I know I can quit anytime I want, I might as well drink it and enjoy the last coffee on earth.

I’ve been out of food for weeks now, and starvation is weakening me more each day. The can of coffee still sits unopened, though. I have decided to save it until the very end. If the last thing I do before I leave this world is drink the last cup of coffee in that can, I will die a happy man. I’ll have to do it soon, though. I’m on my last two gallons of bottled water.

Maybe it’s time I left the shelter. There is probably clean water on the surface. Hell, I don’t even care if it’s contaminated, just as long as it will make a decent cuppa Joe. But… what if it’s total chaos up there? I’d be killed for my can of coffee for sure. I guess I could leave it in the shelter. Nobody knows it’s here. But what if I was followed on the way back, or worse, what if someone found this place – and my coffee – while I was away? Without my coffee, I have nothing. No, the only way it will be safe is if I stay and guard it.

When I finish the water I have open, I will open the last jug of water along with the can of coffee and brew a nice steaming cup of Heaven. When the coffee is gone, I will leave the shelter. If the world is destroyed, I’ll use the revolver I took from my neighbor’s hand and exit in likewise fashion.

NO! NO!!!! I went to open the last water jug and found it empty! DRY! All this time I thought it was full but I didn’t actually pick it up and shake it. The jug must have had a leak at the bottom because the water is long gone. No. No. No. I can’t live without water, because without water I can’t make coffee. A world without coffee is not one I want to face.

Goodbye world, whatever’s left of you.

The steel door groaned open. Two faces peered into the hole, closing their inner eyelids to shield their eyes from the dust that rose.

“I’m not sure. Looks like some kind of ancient ruins. There’s a cave or something down there. Let’s go down and check it out.”

They scuttled down the shaft into the cavern below.

“Look there! Bones! What kind of creature is that?”

“I don’t know, but it’s not one of us. Look, only four appendages and it doesn’t even have a tail! Must be some kind of weird old fossil.”

“What’s that object beside it?”

A webbed, green-scaled hand reached for the metal can.

“Is it some kind of weapon?”

“I don’t think so. Maybe it’s food or something. Look, I can open it.”

“I don’t know, but it smells delicious! Should we taste it?”